So much of what we do is from relationships formed from one project to the next. I once worked with a church that had a group formed of young adults meeting on Sunday nights, with a dynamic worship format and lots of technology. The group was a phenomenal success and in less than a year grew from a startup team of less than 20, to over 1,000 meeting in two services, and offshoots starting up in different parts of the city on other nights.

Eventually the Pastor of that group moved on, and a few years later contacted me because he was starting a new church with the same type of format. Much of the sound system was in place, but a donation of a substantial number of intelligent lights offered opportunities for a significant lighting rig. But they were still less than half way to a finished product. A temporary location had been selected in a local school auditorium, but there was one catch, the room had to be cleared during the week for school programs.

The Pastor reached out to me for help with finishing out the video and lighting rigs, determining the best design to employ for the donated equipment, and to come up with a video rig that could fit his budget, impact the audience, and yet be easy enough to remove every week for the school. Knowing that volunteers tend to wain after the first few months, we needed to make this as low on labor demands as possible. After some negotiations with the school we were able to work out a deal that was beneficial to both the church and the school. During the week we could leave most of the lighting in place, and allow the school to have use of it for their programs. We were also allotted some storage leeway on the stage for screens, that would be quite labor intensive to remove.

After finding the right video system to fit their needs and budget, we began to lay out the rigging and lighting on AutoCad. Not only did we need to hang a majority of the lights, but also the projectors. With two side screens and a three projector blend across the center of the stage, every square foot of truss became essential. The center screen was rigged from motors hung on the high steel so that it could be flown out during the week. Sounds simple enough, but when you are working on a small stage with existing lighting as well as the lighting that we would be adding, real estate becomes very tight. Add to the mix a somewhat fragile screen in motion and clearances also have to fit into the mix.  The side screens were ground supported, but designed with the right dimensions to  allow them to be easily carried to the back of the stage and hidden behind the school’s drapes. Much of the upstage lighting was designed to fly out on batons, while the remaining set piece and ground lighting were planned for packing quickly into road cases. The Front of House Truss would remain in place, but all of the metrics for the projectors had to be just right in order to fit the blend when the screed was lowered, and allow clearance during the week for the school. Every detail and measurement was planned carefully. In the end, the 50+ fixtures that had been donated became overwhelming for the lighting plot, so some were added to the lobby for walk-in effect, along with additional set pieces.

Like most good shows, the proof is in how the show appears to the audience. If it comes together seamlessly, then we hit the target. Years later the rig is still running well and the church has had steady growth from day one, when things were standing room only. Watch the video above to see how the system performs… 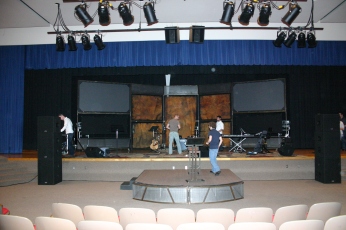 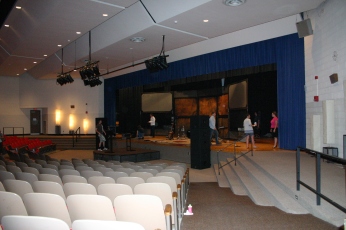